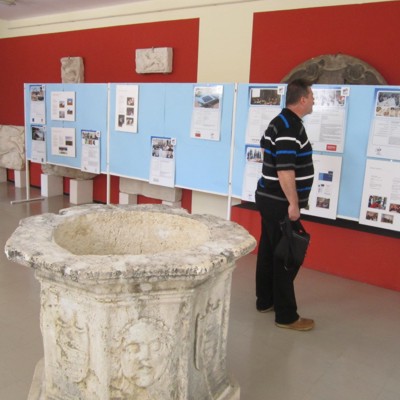 IPATECH at the exhibition of EU projects of the Zadar County

Among the exhibited projects, the project IPATECH drew attention, in which one of the nine partners is the Croatian Chamber of Economy – Zadar County Chamber – the projects funded since the pre-accession time gathered a significant number of stakeholders and partners from a number of institutions of culture, education and the economy, which are also confirmation of yet stronger commitment to European funds after the accession to the EU

In „Lapidarij“ of the Zadar Town Museum, as part of a series of festivities and celebration of Croatian accession to the European Union, on 1 July a unique and interesting exhibition of projects from the Zadar County funded in the pre-accession period was opened. The exhibition was opened by Stipe Zrilić, Zadar County Prefect, who on this occasion said that in the preparatory period, before joining the EU, a very good job was done and that all relevant and interested parties showed exceptional willingness to withdraw money from the European Union to contribute to the development of the Zadar region.
According to the Prefect Stipe Zrilić, current activities of many institutions in Zadar County were on a European level even prior to the act of entering, as evidenced by the fact of 73 projects worth 52 million and 250 thousand euros. Such projects were planned, prepared and made on several levels - by many local government units, regional institutions, civil society organizations, cultural and economic entities, entrepreneurs and artisans, their chambers, museums, libraries and educational institutions.
Entrepreneurs and companies, as well as the institutions and organizations of civil society, in various ways were involved in the development of projects, as applicants or partners, which meant also the training but also a significant increase of the number of participants in the processes and procedures for preparing and carrying out projects. This has also strengthened the fundamental capacity for further participation of Zadar actors and institutions in the new possibilities of the Republic of Croatia and the Zadar County where the funds that will be available to future holders and applicants substantially increase.
The exhibition at the very beginning aroused the attention of citizens and experts from Zadar and the county who could plainly see how even so far motivation, activity and professional engagement of individuals and institutions attracted notable amount of money from European funds. One of the projects currently being implemented is also the IPATECH, in which one of nine partners is the Croatian Chamber of Economy – Zadar County Chamber. Examples are also projects - renovation of Maškovića han,several demining projects, waterworks Lisičić - Buković, Zemunik - Škabrnja, mobile library of the Zadar Town Library, the sustainable development of tourism in the Park of nature Vransko jezero, project Una - Spring of Life, as well as a number of infrastructure projects in Zadar hinterland, especially in Biograd, support programs for small and medium-sized businesses, and many others.