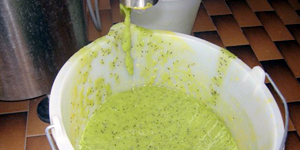 Agrofood Innovation Day at CRA-ORA premises in the framework of the project IPATECH.
On April 15th, 2015 at the premises of the Agrofood Innovation Center established at CRA – Research Institute for Vegetable Crops (CRA-ORA), an Info-day was organized by the Lead Partner of IPATECH project. About 40 persons, amongst which there were farmers, university professors, representatives of agro-food business, representatives of agricultural labor unions and students, joined the event.

While visiting the premises of the Laboratory where the miniaturized line was installed, the participants took part in the demonstration of how the  vegetable and fruit processing machine works. In particular the participants had the chance to be present at the production of Kiwi jam and Tomato sauce. In the wider context of the Agrofood Center  the participants had also the opportunity to talk with the Researchers of  CRA-ORA about different topics: breeding of vegetables for the recovery of ancient cultivars, sustainable agriculture and  all the researches  carried on by  the Institute.
About the latter, the attendants visited the “MOVE” tool, the “Monsampolo Organic Vegetable” long term experiment, a field where different crops in rotation and several soil management techniques are under experimentation.
In the context of the IPATECH sustainability plan to be implemented after the end of the project at the end of the day, new synergies have been found amongst organic and sustainable agriculture and the project concept “pillars”.