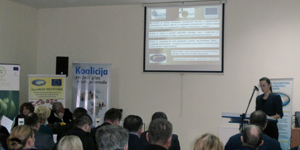 Organization of a conference focused on the implemented international projects. At the premises of the Association of Entrepreneurs and Employers Zepce the conference on the subject "The agribusiness sector - innovation and technology transfer as a basis for economic development of the sector, with special reference to the sub-sector of medicinal and aromatic plants" was held on 03.12.2014.

The event was organized together with the ceremony of the 15th anniversary of the Association of Entrepreneurs and Employers Žepče took place. Official opening of the conference was carried out by the President of the UPIP Zepce, Mr. Mladen Ivesic and Executive Director Mrs. Mira Jovic. They addressed the numerous guests with good wishes and warm welcome. Also to the guests addressed the Prime Minister of Zenica-Doboj Canton Mr. Munib Husenagic, the Secretary of Federal Ministry of Business and Trade Mr. Jozo Bejic and Mr. Ivica Curic, the Minister of Labour, Social Affairs and Refugees of Zenica-Doboj Canton.

During the conference, two international projects that are currently being implemented by UPIP Zepce were presented: “IPATECH - Miniaturization technology: synergy of research and innovation to improve the economic development of the Adriatic” and “SMEs without borders”. The results and achievements of IPATECH project that is implemented  within IPA CBC Adriatic programme were presented together with the set goals that  aim at  the establishment of transnational networks between public and private bodies while encouraging the exchange of experiences and innovations in the sector of agrofood industry. The results of the IPATECH project are reflected through support and exchange of experiences and technologies necessary for the development of family households and SMEs from rural areas in the agrofood sector. The project “SMEs without borders” is implemented within the IPA CBC CRO-BiH programme, whose goal is  the establishment and development of joint cross-border activities aimed at creating common economic space for cooperation and support to SMEs. The results and achievements of the project were presented. Their connection with  the support to SMEs in the sub-sector of medicinal and aromatic plants through development of joint cross-border network “MAP network” for the promotion and better positioning of products made of medicinal and aromatic plants on the market was highlighted.

Within the conference, Prof. Dr. Nezir Tanovic from the Agro-Mediterranean Faculty in Mostar and the representative of the NGO “OXFAM” from Italy, Mr. Rasim Tulumovic held the presentations about the state and possibilities of further developing sub-sector of medicinal and aromatic plants in Bosnia and Herzegovina.

Guests of the conference had the opportunity to hear positive examples of entrepreneurship development in the sub-sector of medicinal and aromatic plants that were presented by the representative of the company "Prirodno bilje” Ltd. Banja Luka, Mr. Nedeljko Kusturic and the representative of non-governmental development agency “ACED” from Banja Luka, Mr. Petar Ninic. Representatives of development agencies “RAZ” from Zepce and “TRA” from Tesanj, Mrs. Branka Janko and Ph.D. Ismar Alagic presented the work and activities of these agencies in the agribusiness sector.

The presence of the representatives of the Foreign Trade Chamber of Bosnia and Herzegovina, the Chamber of Crafts of Zenica-Doboj County, numerous development agencies and non-governmental organizations from Bosnia and Herzegovina and business partners of the Association of Entrepreneurs and Employers Zepce contributed to the success of both the  ceremony and the  conference.

Also public and private institutions, companies that took part in the event showed their appreciation and support for Association of entrepreneurs and employers Zepce and for the work to be done in the future with business activities and successful implementation of projects.